There are places in Ibiza which deserve special attention, for discovering the more historic side of the island, and this is the case of Dalt Vila, a beautiful walled landscape which stands over the city of Ibiza.

The main access to the town in found in Mercat Vell, in the Marina quarter. This is known as Es Portal de ses Taules and is crossed by a drawbridge from the Roman period which leads into the Plaza de Vila, a charming place for shopping and dining in romantic restaurants.

Before beginning the ascent to the higher area, it must be mentioned that in the street that passes over the Portal de Ses Taules the Ibiza Contemporary Art Museum (MACE) can be visited, one of the most important artistic locations in Ibiza. Facing it is the stronghold of Santa Llúcia with spectacular views of the port.

Following this route, the Plaza España is reached, where the City Council is found in the former premises of the convent of Santo Domingo. Finally, before reaching the Plaza de la Catedral, the Sant Ciriac chapel is found, where according to legend, Catalan troops entered to conquer Dalt Vila in 1235. A little further is the Casa de la Cúria, a building which is home to the Medina Yabisa Interpretation Centre, the perfect place for discovering the island’s Muslim past. Once in Plaza de la Catedral, there are many things to see. Visiting the archaeological museum is highly recommended. 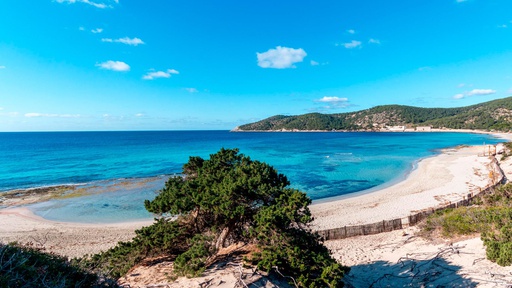